“Infrastructure, capital markets and opportunities for the real economy in the post-pandemic landscape”. Read the fourth quarterly column edited by BAFFI Carefin

Read the fourth issue of the Quarterly Columns on Capital Markets, the periodic comments of EQUITALAB that deal with specific, relevant topics of the financial domain.

Infrastructure, capital markets and opportunities for the real economy in the post-pandemic landscape

The current infrastructure gap in most developed and emerging economies can be quantified at about $15 trillion by 2040 (Oxford Economics, 2017). However, this figure is likely to be heavily underestimated considering that it does not include investment needs for social infrastructure like hospitals, long-term care homes, social housing and other social facilities (Franklin Templeton, 2020). The Covid-19 pandemic has indeed demonstrated how much governments have underinvested in social infrastructure and how unprepared they were to tackle the dramatic effects of the spread of the virus.

A number of extraordinary investment programmes implemented by the governments of developed and emerging economies are intended to limit the disastrous effects on real economies caused by Covid-19. These have also revived the longstanding debate on the ability of infrastructure investment to stimulate output and its effect on inflation. In fact, infrastructure investment is not like other forms of economic stimulus. It combines demand stimulus with long-term support for the production of goods. This begs the question: is it a stimulus to the economy in the short run? Does it improve production capacity and ultimately economic growth in the long run? The economic literature’s basic findings on the topic suggest that the effect of public infrastructure spending on output and job creation is small in the short term, but it has large impacts in terms of long-term productivity and economic growth (e.g., Baxter and King, 1993, Fernald, 1999, Leduc and Wilson, 2013, and Glaeser and Poterba, 2021). For example, in the case of public spending on US highways, the change in output relative to the amount spent (the ‘multiplier’) is on average around two over a ten-year horizon.

However, it is clear that a full recovery, one that is able to reabsorb the economic damage inflicted by Covid-19, cannot rely on increased public spending and public debt alone. It is necessary to attract private capital coming from institutional long-term investors (life insurance companies, pension funds, foundations and non-profits). Private investors must become partners with the public sector in a virtuous collaboration, multiplying the resource pool that can be deployed to infrastructure investments. This opportunity to reinforce public-private partnerships in infrastructure investment is eased by the relevant pool of liquidity available in capital markets. As shown in Section 3, due to a long period of quantitative easing and financial repression, private investors have turned to infrastructure as a convenient alternative to traditional asset classes and as a ‘safe harbour’ able to provide a DIY effect: diversification, inflation protection and yield.

Yet, the private sector looks at infrastructure today as a segment subject to rapid evolution, very far from an outdated conception that confines this asset class to the limited perimeter of transportation, gas / power / water and telecommunication utilities.

In fact, more than other sectors, infrastructure is subject to long-term trends that are able to reshape the societies of tomorrow. And these same societies in turn will increasingly depend on what infrastructure will be able to deliver far into the future (Gamberale and Gatti, 2021a).

As shown in Section 2, it is possible to say that infrastructure will become a ‘thematic’ rather than ‘sectorial’ ambit, as we are used to considering it today. Four are the key ‘themes’ that private investors are looking at from a long-term perspective (Gatti and Chiarella, 2020).

The first is now well established: the sustainability and environmental issue. By nature, infrastructure is a sector with strong environmental impact. As we all know, the environment will have to be preserved by moving all production processes toward a drastic reduction in the use of raw materials, organic and inorganic, and shifting these processes to a virtuous recycling of materials, in line with the logic of the circular economy. Ambitious targets of decarbonisation set out by governments will boost investments in renewables and promote the optimal use of water and arable land (Gatti, Chiarella and Fiorillo, 2022). In addition, more investments in renewable energy will further boost the funds funnelled into smart grids, energy storage, smart and electric mobility and the space economy (first, as a step in the digital transition, second as an additional step in production transformation). Augmenting renewable energy will also limit dependency on traditional fossil sources, a key issue of the recent international geopolitical tensions.

The third investment theme is represented by demographic evolution. Modern societies are, on one hand, experiencing a trend of progressive ageing and, on the other, increasing polarization between younger and older segments of the population. This polarization has evident effects on the evolution of infrastructure. Younger people and millennials will reinforce the sensibility toward ESG and will accelerate the digital transformation of society (Bank of America, 2022). Older people – the silver society – will require greater investments in personal health and safety, redesigned urban spaces, and reimagined housing and transportation solutions. Incidentally, these demographic trends will force developed economies, particularly Italy, to fill in the gap of the active workforce with clear, well-designed immigration policies, avoiding past mistakes of ‘all and forever’ or ‘no one and never’.

The fourth theme is logistic supply chains. We learned a sad lesson first from Covid-19 and more recently after the turmoil from the outbreak of the Ukraine-Russia conflict: excessively stretched procurement and distribution supply chains are put at risk in the face of unexpected, destructive events like pandemics or geopolitical clashes. Logistics become an essential infrastructure to guarantee stable, smooth production and to contain the painful effects of a global crisis, which are palpable and visible today.

Against this backdrop, the NRRP (National Recovery and Resilience Plan) set up by the Italian Government in 2021 (Equita, 2021a and Equita, 2021b) has defined the key guidelines for relaunching the Italian economy in a post-pandemic scenario. The Italian NRRP can count on a significant budget: including about €13.5 billion of the React-EU plan, available resources exceed €235 billion. Of this figure, €62 billion is available for the Ministry of Infrastructure and Sustainable Mobility alone, the lead actor in reducing the infrastructure gap in the country. While an analysis of the NRRP shows a number of positive aspects, it is also important to point out that some issues – the result of a historic heritage that Italy seems unable to shrug off – remain unresolved (Gamberale and Gatti, 2021b).

But now let’s consider the positive aspects. The NRRP is articulated in ‘thematic areas’ which is a good approach considering the shift of infrastructure from a ‘sectorial’ to an ‘ecosystem’ concept, as we will describe in more detail in Section 4.1 (see Figure 9). Among them, the green revolution/ecologic transition, the circular economy, digitalisation, sustainable mobility and, to some extent, the segment dedicated to ‘inclusion and social cohesion’ provide a solid framework for the objectives of the plan, expenditures targeted to goals rather than to sectors. This avoids a fragmented and uncoordinated approach to public spending. Furthermore, the thematic focus shows a clear vision of the evolution of infrastructure in the society of tomorrow, refraining from allocating resources to investments whose future is short term (so-called ‘stranded assets’).

However, the NRRP lends itself to two key criticisms.

The first is that the post-pandemic scenario shows a €370-billion infrastructure gap for Italy over the next 18 years (see Section 2). Given the already high level of public debt, and even considering the possible revision of the EU Fiscal Compact rules, this gap simply cannot be filled by Keynesian-style public investments alone. The public sector must play a pivotal role in relaunching infrastructure spending. However, the big pool of financial resources – which is what makes the difference – is available from private, long-term investors. The NRRP seems to give limited attention to the need to attract private capital to leverage using virtuous forms of Public-Private Partnerships (PPPs).

The second criticism springs directly from the previous one. A country that supports cooperation between the public and private sectors for the construction and operation of infrastructure must also be convinced that the PPP model can work only if minimum conditions are satisfied. In particular, public regulation and controls must be coordinated with the private financing, risk management and O&M (operations and maintenance) of infrastructure. The private sector invests only if it can rely on a clear, well-established regulatory framework, explicit in terms of the rules of the game, and with an authoritative public sector establishment able to balance the risk-return objectives of the private investors with its responsibilities in building and managing the project (Ernst & Young, 2021). The public sector, in turn, must provide a class of well-prepared public officials, able to play their role of attentive regulators and controllers of the private partner and the overall performance. Sadly, recent experiences of mismanagement of infrastructure in Italy require a changed attitude toward this aspect. What’s more, concession agreements, regulations and controls must become more exact and disciplined. The NRRP, also in the chapter dedicated to reforms, does not dedicate much attention to this and is obviously not forward-looking. 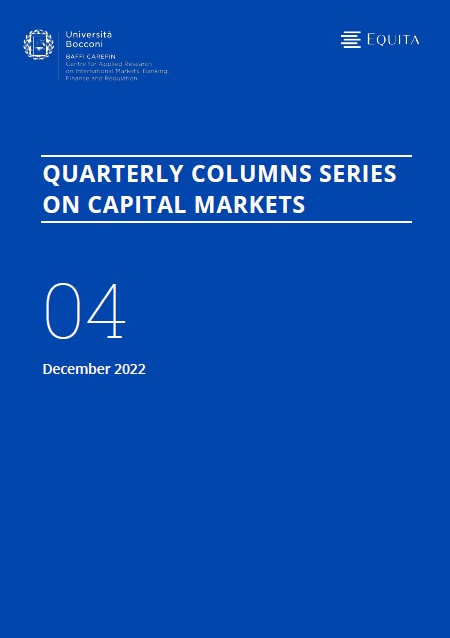