This second joint project “analyses the attitude of investors towards equity and debt securities issued by Italian companies in an effort to assess their potential role in financing Italian companies.

This second joint project, “Capital Markets and Investors in Italian Securities: Is there a communication breakdown?”, in particular, analyses the attitude of investors towards equity and debt securities issued by Italian companies in an effort to assess their potential role in financing Italian companies.

Below you’ll find the research written in 2015 by the BAFFI CAREFIN Research Center of Bocconi University in collaboration with Equita.

Capital markets are an increasingly important source of funding for Italian companies. Following the onset of the financial crisis in 2008 and the subsequent credit crunch, corporates worldwide have realised that it is essential to develop alternative sources of funding and to avoid relying excessively on bank financing. This development is extremely positive, particularly within the Italian economic environment which has historically resorted almost exclusively to conventional bank credit, displaying financial weakness during the crisis.

However, the transition by Italian companies to a more balanced funding structure is still far from complete. As the Governor of the Bank of Italy, Mr. Ignazio Visco, made clear in May 2014, Italian firms’ indebtedness and dependence on bank credit are signs of their financial vulnerability. With almost €1.3 trillion in financial debt and €1.6 trillion in net equity, Italian firms’ overall leverage is 44 per cent; bank loans account for 64 per cent of the total debt. For the euro area these ratios are considerably lower, averaging 39 and 46 per cent respectively (…) Bringing financial leverage into line with the European average would require a capital increase of around €200 billion and an equal reduction in debt.”

It is therefore quite clear that fostering the development of capital markets is an important priority for our country. In light of this, we welcome the opportunity to continue Equita’s three-year cooperation with Università Bocconi aimed at analysing the key features of the capital markets for Italian companies and proposing concrete initiatives to improve them.

The hope is to gradually make these markets comparable by quality and size to the most developed ones in Europe. We are also pleased that the Italian government and national regulators have made further progress in simplifying access to the capital markets for Italian companies. This has been achieved through further improvements to the regulations regarding both bonds issuance by unlisted companies (so-called “minibonds”) and lending by non-bank entities. A set of initiatives has also been implemented which streamline the obligations for small and midsize listed companies and offer more favourable tax treatment for the issuers. In this respect, Italian companies in all honesty have no excuses preventing them from looking for alternative funding sources and accessing the capital markets.

It is therefore even more disconcerting to consider the treatment of equity and debt investors, particular domestic investors, who alone systematically invest in small and midcaps and constitute the key pillar needed to support deep and successful capital markets.

These are the very investors who are largely ignored and most poorly treated by our governments, institutions and media, despite the fact that most senior representatives of our key institutions keep reiterating that investors should increase their exposure and commitment to the “real economy”.

The current tax regime, as a matter of fact, totally discourages anyone from investing in publicly traded shares or bonds of Italian companies, i.e. the “real economy”:

This is a major distortion in the investment policies of individuals. What’s more, this policy is particularly misguided as it encourages high-saving Italians to invest only in government debt and real estate. This strategy is not useful for the economy, nor does it help people build an asset allocation consistent with their future needs as retirees, unlike in most developed Western countries.

Moreover, no money has been committed by the Cassa Depositi e Prestiti or other public institutions to a fund of funds dedicated to listed small-caps, despite reiterated calls from the financial industry. The money theoretically earmarked to fund the minibonds has not yet been allocated, and this more than two years after the change in regulations that allowed Italian companies to issue these instruments.

Finally, Italian banking foundations, pension funds and similar entities continue to dedicate a minimal part of their total assets to Italian companies. Instead in other countries such as Japan, the main pension funds have decided to increase dramatically the portion of assets invested in domestic equity and debt securities, i.e. the productive economy.

The result of all of this is the lack of a strong domestic investor base that can sustain our economy, absorb financial shocks coming from abroad and protect the future wellbeing of prospective retirees. In light of all this, it is truly troubling to read in Milano Finanza that in 2014 an estimated €200 billion have been subtracted from the Italian real economy due to a number of factors, including over €100 billion of Italian savings invested in foreign assets.

We find it perplexing, to say the least, that equity and debt investors are not one of the key priorities of our public institutions. We believe our policy makers should be fully aware that since 2008, equity investors have effectively saved the Italian financial system through an aggregate investment in the capital increases of companies and banks totaling almost €70 billion, i.e. equivalent to the average commitment by the main European governments to bail out their banks. This same amount, €70 billion, is also similar to the aggregate value of all the budget laws passed in Italy since Mr Monti’s in 2011. This means that investors have contributed enough money to the system to prevent further painful tax increases and spending cuts, which would have been unbearable for the Italian economy. But after many years of poor financial returns, as substantiated by the worst stock market performance of any European market with the sole exception of Greece, investors in Italian securities are increasingly rare. As a result, we need a coordinated policy and specific incentives to increase their exposure to our economy. To prove the point, suffice to note that 50% of the Initial Public Offerings on the main Italian stock market since 2008 have failed to be completed, twice as many as in the main European markets. This prevents high-quality companies such as Intercos, Fedrigoni and Rottapharm from achieving their objectives and spurs some of them to find foreign buyers to replace the Italian stock market.

The key initiatives which are needed to address these issues are very simple and clear to anyone working in the financial industry:

More generally speaking, there is a need to foster a culture where investing in securities is not represented as “speculating”, and where investments are not defined as “financial annuities”. The Italian translation of this latter term (“rendite finanziarie”) has a clear negative nuance, as if it were compared and contrasted to productive investments. Financial investments are the key to the growth of our economy, and investors are the essential ingredient for our economic development.

We sincerely hope that our policy makers and regulators will focus on this vital issue and develop a coordinated legal and fiscal framework. Once again, we thank Università Bocconi for this important project and for the high quality analysis of the Italian investor base and its shortcomings, as addressed in this paper. 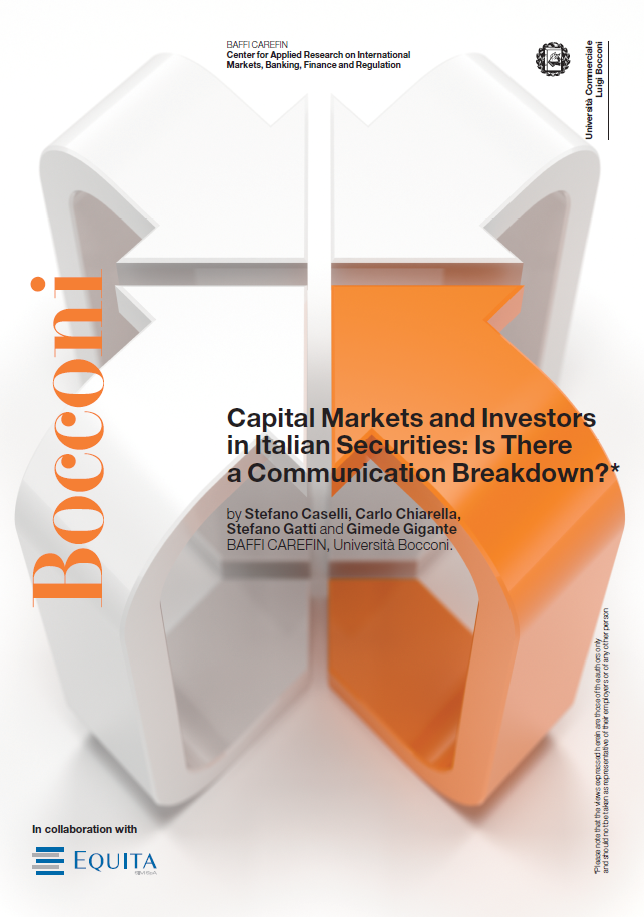