The key question of this edition of the paper is what drives Italian companies to issue a bond for the first time (inaugural offering) and the determinants of the pricing of that bond at launch. Looking at the pricing of these bonds, we identify credit rating, issue size and proximity with investors as the key determinants of their yields at launch.

The key question of this edition of the paper is what drives Italian companies to issue a bond for the first time (inaugural offering) and the determinants of the pricing of that bond at launch. Our goal is to identify the main differences between issuers and non-issuers and among various issue types, in order to shed light on what factors may foster or hinder the ongoing corporate funding disintermediation process. To answer these questions, we collect data on 102 inaugural bond offerings by Italian non-financial companies over the period 2009-2018. From a comparison of issuers with their closest comparable firms we show that company size and leverage are the key pre-issue characteristics that drive the issuer’s decision to launch a bond, rather than resorting to more traditional bank loans. Then, looking at the pricing of these bonds, we identify credit rating, issue size and proximity with investors as the key determinants of their yields at launch.

Below you’ll find the research written in 2019 by the BAFFI CAREFIN Research Center of Bocconi University in collaboration with Equita.

It is a great pleasure for Equita to celebrate the completion of the second three-year period of our partnership with the Bocconi University, aimed at analysing and promoting Italian capital markets.

This project started in 2012, at a time when the public debate on finance was almost exclusively focused on our distressed banking system and the sustainability of our public debt, while little attention was devoted to the Italian capital markets, although they are historically less developed than those in other financially advanced countries.

When we started tackling this topic with Bocconi, we were concerned about the fact that no structured and consistent effort had ever been taken in Italy to analyse and promote the capital markets: as a matter of fact, they represent an essential asset for the country development.

Since then, thanks to the high-quality academic contribution of Centro BAFFI Carefin, we have analysed the ongoing condition of the capital markets, focusing from time to time on intermediaries, investors, companies and their reasons to go public. Moreover, we have carried out a thorough comparison with more developed models, such as the UK one, and analysed the performance reported by the securities issued by Italian companies over the last decade. This analysis has always been flanked by our recommendations for regulatory improvements and system-wide initiatives.

Over time, encouraging improvements have emerged but there are still elements that represent a serious issue hampering the development of the country.

Among the positive findings, it is undoubtedly included the fact that the financial crisis has finally put an end to the almost monopolistic primacy of the banking system as a source of corporate financing. As the Bank of Italy has often pointed out, this is an anomaly of our country: we believe that over time the monopoly of the banking system has led a financial weakness in our enterprises as well as excessive conflicts of interest displayed by the banks, an issue that has not been satisfactorily tackled yet. Therefore, the fact that companies are increasingly turning to capital markets to raise capital must be truly welcomed.

Furthermore, over the last few years regulatory changes and tax benefits have been introduced in order to support the development of the capital markets. Some of these changes were also the result of the work ensuing from our partnership with Bocconi; achievement that we are proud of.

Among the negative findings, we must regrettably include: the little progress made in regulatory simplification – in spite of the European concern in this regard and in particular for small and medium enterprises; the lack of initiative by our institutions to defend our markets from harmful regulations such as the research unbundling envisaged by MIFID 2; the general lack of attention for industries representing the core of the capital markets – thus requiring a structured action plan – namely asset management and equity and bond intermediation.

This year’s research work tackles a key topic in this scenario, namely the access to bond markets by Italian companies. The main finding here is that although companies increasingly rely on capital markets, this option seems to be basically limited to large-sized companies with high existing debt levels. The bond market for smaller companies is still much less developed than it should ideally be. In our view, the main reason is that no sufficient effort has been made to develop the most important element for the expansion of this market: specialised investors.

These findings prompt us to single out some necessary initiatives to promote the positive development of capital markets for companies:

Equita, established as Euromobiliare in 1973, has always been a strong and innovative player in financial markets, also contributing to their development. Therefore, it is a great pleasure and honour for our institution to conclude the second term of our cooperation with the Bocconi University; we will be delighted to renew it for the coming years in the hope of contributing to the development of capital markets by identifying and promoting useful initiatives for our country. 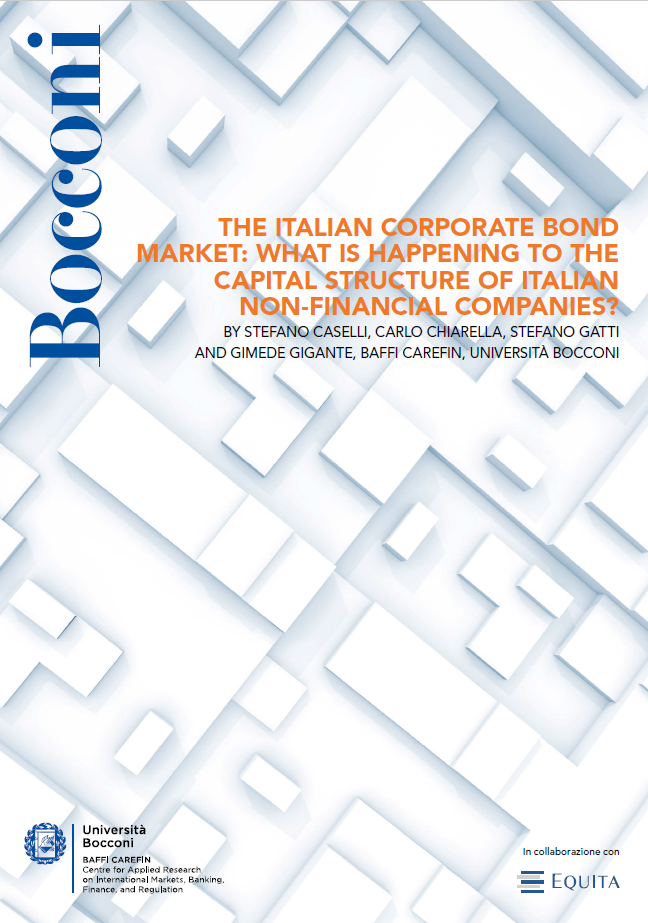