The key question of this edition of the paper is why Italian companies decide to go public or, conversely, why they decide to stay away from capital markets. Findings show that firms go public when their pre-IPO characteristics are such that the arguments in favour of an IPO prevail over the arguments against it.

The key question of this edition of the paper is why Italian companies decide to go public or, conversely, why they decide to stay away from capital markets. We try to answer these questions with two different methodological approaches. On one side, we carry out an extensive number of interviews with listed and private companies making up a focus group, so to collect first-hand indications regarding our key question and to corroborate the results of the second part of the analysis. On the other side, we set up an empirical analysis over the period 2006-2016 that studies the pre-IPO characteristics of firms that go public compared to those that do not. In particular, we are interested in identifying the factors that motivate Italian firms to either go public or remain private.

Our findings show that firms go public when their pre-IPO characteristics are such that the arguments in favour of an IPO prevail over the arguments against it.

Below you’ll find the research written in 2018 by the BAFFI CAREFIN Research Center of Bocconi University in collaboration with Equita.

2017 will be remembered as the year in which the Italian capital markets final- ly took a significant step toward becoming a reliable source of funding for Italian companies.

The volume of issues by Italian corporates in the debt and equity markets increased dramatically from 2016 to 2017, with more than €50 billion raised through almost 200 issues in 2017. This was more than three times the number of issues seen in 2007. Even more interestingly, half of these issues took place in markets dedicated to SMEs that were launched in the past 10 years, especially the AIM market of Borsa Italiana and the “minibond” market. While equity issues by larger companies in the regulated markets have been relatively stable over the past ten years, the smaller companies have been the major contributors to the growth of the markets. This indicates a clear cultural shift toward increasing openness to the capital markets and away from the traditional sources of financing.

We owe this progress to a number of factors. First, Italian companies have realized that it is wiser to have a more balanced capital structure and avoid relying excessively on the banking market, which showed itself to be relatively fragile and volatile during the financial crisis. Second, investors have learned to appreciate Italian companies, which have shown tremendous growth and resilience as well as good stock and debt performance over the years, as discussed in Bocconi’s 2017′ research paper on the topic. Third, a few determined opinion makers, including Bocconi, Borsa Italiana, Confindustria, and Equita, have dedicated a significant amount of time and effort to analyzing and explaining the merits of companies accessing capital markets and establishing a productive dialogue with institutions. In fact, we at Equita are so committed to these topics that we promoted the listing of an SPAC and subsequently completed the listing of our firm on the AIM market in 2017. Finally, and most importantly, the Italian government has passed two fundamental pieces of tax legislation. One, issued at the end of 2016, aims to incentivize long-term retail investors via the highly successful PIR funds. The second, which was finalized in 2017, offers a tax credit on listing expenses for SMEs completing an IPO.

All of these factors have contributed to a renewed focus on Italian capital markets as well as a new, positive tone with regard to companies that open up to external capital. The PIR funds raised more than €10 billion exceeding all expectations, and the liquidity and performance of listed Italian corporates improved dramatically. The markets are now ready to welcome many new, successful companies.

Within this context, we are delighted to celebrate the fifth year of our partner- ship with Università Bocconi, which is aimed at analyzing the Italian debt and equity markets as well as suggesting initiatives that could further improve them.

We are particularly pleased that some of the initiatives that we have jointly pro- posed in the past have become a reality.

As the markets have improved so significantly, we believed it would be useful to analyze what drives companies to undertake an IPO and to examine why some of them prefer to remain private. This is the focus of Bocconi’s 2018 research paper, which we feel is particularly fitting at a time when some of the obstacles that have traditionally prevented companies from considering the equity markets, such as a lack of dedicated investors, have been effectively removed.

The paper offers a very interesting analysis, which shows that size, growth, and capital structure are some of the key factors driving Italian companies’ decisions to go public. This means that smaller companies, which do not seem to require equity and are not growing very fast, do not approach the capital markets despite the clear scientific evidence that an IPO creates opportunities for companies to prosper and grow much faster than private companies.

This brings us directly to the core of what needs to be do be done to make it easier for companies to undertake an IPO. These factors have not yet been addressed in a satisfactory way by Italian or European institutions.

We thank Bocconi University for its outstanding work during the first five years of our partnership, and for sharing the values and objectives of this project. We look forward to continuing our collective effort to analyze, promote, and improve the Italian capital markets. 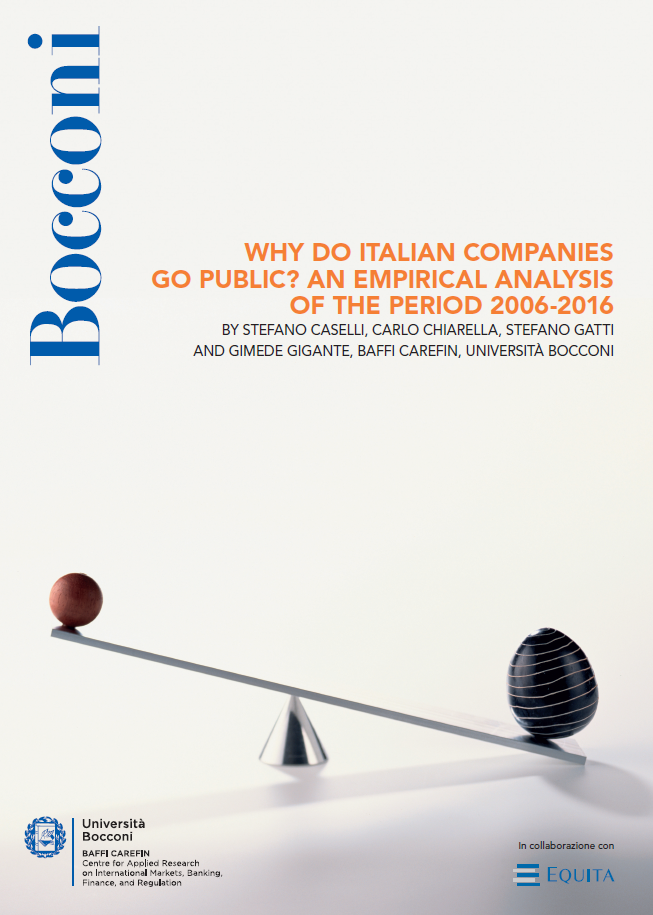