Why the need for a Scoreboard on Capital Markets?

It may seem provocative, but it can be said that the need to recover GDP beyond the value of early 2020, along with the availability of re-sources for Next Generation EU, together represent an opportunity never experienced by our country: the chance to really reflect on the fac-tors of growth, employment creation and medium-term planning. The key role of the European programme is not so much the financial resources (which are always welcome!) but the obligation to think about objectives and instruments to achieve them. It is not a constraint, but a fundamental working method which governs economic policy action. To deliver a better country to future generations.

The profile of the companies we need plays a central role in this debate: What size should they be? What areas need to be developed? Which governance structure is most effective? These are questions that allow us to deal with an issue that is completely unresolved today, the notion that praise of SMEs is written in stone. However, this leads us to consider big business as a negative element, as it is ‘genetically’ different from SMEs. The debate must be approached without prejudice and partisanship. The need for our country to have a higher number of large companies, capable of competing on an equal footing with their European counter-parts, is a crucial element in the coming years.

Yes, we need much larger companies. But above all, we need passion for growth. Among the new year’s resolutions, the issue of the size of Italian companies and their ability to compete globally must be seriously put on the table for the good of our country. The year 2022 may represent a year of transition that connects the long wave of the pandemic and our unexpected but robust rebound of growth to a return to normality. That means discussing how to consolidate growth beyond pre-2020 levels, how to leave the area of public subsidies, how to make debt tolerable and how to progressively use European PNRR re-sources with a multiplicative effect over time. If we seriously believe that the real antidote to public debt, unemployment and expenditure reduction is growth, and that growth is based on the values of ‘scale’, ‘size’ and ‘internationalisation’, then we must work seriously in this direction. Overcoming the prejudice, deeply rooted in Italy, that these values are antagonistic to certain principles that underpin the structure of Italian society. The result of this mindset was in fact a narrative praising the small dimension that frequently led people to say that growth goes against localism, goes against the very “Italianness” of products and businesses; that growth is in conflict with small business and al-ways presupposes a change in governance which brings instability. The defense of the lo-cal dimension has led to opposition to – if not an actual battle against – the concepts of growth and scale. But today it is no longer possible to sustain this opposition if we want to tackle the serious issue of wealth creation and not just re-distribution. This does not mean repudiating the world of SMEs, districts and sectors, as they must continue to be an indispensable corner-stone for our system. But at the same time, they must demonstrate the capacity for growth and go beyond the status quo. The same start-ups that are finally emerging with intensity even in Italy often seem affected by the same syn-drome, where the goal is not to grow to become big, but to be born and survive thanks to the abundance of liquidity.

What do the numbers tell us about the size of Italian companies, and especially about their relative position? If we look at the Fortune 500 ranking, in 2021 only six Italian companies made the cut, one half of which are financial intermediaries (i.e., Assicurazioni Generali, Banca Intesa and Unicredit) and the other half, companies developed within the public system (i.e., ENI, ENEL and Poste Italiane). In 2011, Italy had ten companies in the ranking and eight in 2001. These numbers are not only a long way from the United States and China but also from the European countries with which we are compared: 27 companies in Germany and 26 in France, and remember that Spain is also ahead of us with 9 companies. If we look at the dynamics of the last 20 years, in addition to China’s overpowering growth and an inevitable adjustment of relative positions, only 50% of the companies present in the ranking in 2001 is still there today, and of these 90% have systematically resorted to M&A activities. Italy has not only seen companies slip from their positions, but above all it has not proposed new names and has not seen the creation of clusters in our country arising from activism in the field of acquisitions, except for financial intermediaries.
All these elements pushed us to work in the direction of a careful monitoring and benchmarking of Italy’s position with respect to the main European countries. The capital market and the role that listed companies have in terms of over-all impact on the economic system become crucial to the fate of the country. The construction of a Scoreboard on an ongoing basis, including an annual report providing pertinent comments, becomes a relevant tool. It serves not only to move the public discussion forward, but also to highlight not only the strengths, but also the weaknesses that the economic policy of the country must improve. 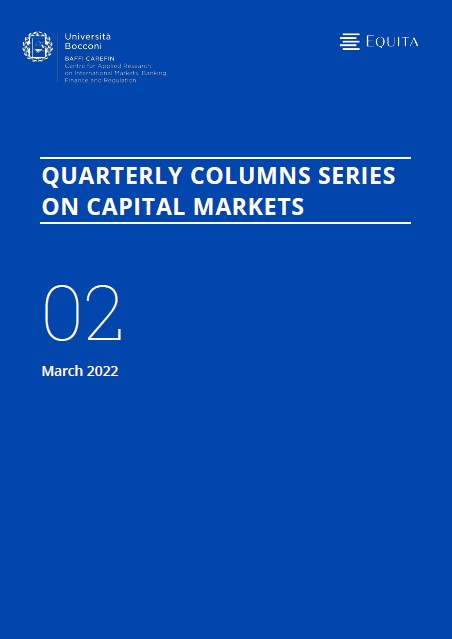