This third joint project carried out a benchmarking exercise involving the UK and Italian contexts. The objective was not to identify what is good (or better) and what is not. The paper compares the two countries to show how a different political economy view can impact the functioning of financial markets, the behaviour of investors, and the financial policies of corporations.

This third joint project carried out a benchmarking exercise involving the UK and Italian contexts. The objective was not to identify what is good (or better) and what is not. We have compared the two countries to show how a different political economy view can impact the functioning of financial markets, the behaviour of investors, and the financial policies of corporations. Data reported in the paper clearly indicate a convergence of the two financial systems and many steps have been already implemented in Italy and many are still in the policymaking agenda. The benchmarking exercise of this paper might indicate further ideas to accelerate the reform of the Italian financial system.

During the first few years of the financial crisis, Italian commentators, when comparing Italy to the UK, always highlighted the inherent weakness of the UK economy, its over reliance on finance, its depleted manufacturing industry as well as the damages to the real economy caused by its complex financial system and products. Italy, commentators maintained, would emerge from the crisis much better than the UK thanks to our strong manufacturing base and the fact that our financial system was based on solid, traditional banks.

History clearly proved those commentators wrong: the UK has been out of the recession for a few years and its economy is consistently growing at a faster pace than the Italian one.

Moreover, whilst in the UK financial crises have been largely limited to a few institutions such as Royal Bank of Scotland and Northern Rock, the weakness of Italy’s banking system and strong need for its reform have become clear and continue to impact negatively our economy. And finally, whilst the debt and equity capital markets in the UK have once again proved to be a formidable source of funding for companies as well as a great means for British savers to diversify their financial assets, Italian capital markets have continued to struggle, with a decreasing number of brokers, few successful Initial Public Offerings and a very limited number of domestic investors, forcing companies and savers to rely mostly on the banking system for their funding and investments, with a disproportionate share of Italian wealth invested in underperforming and illiquid real estate assets.

It is important to note, that the strength of UK’s capital markets is primarily the direct consequence of a clear focus by all of the UK governments over the years, regardless of their political colour, based on the assumption that strong capital markets would be a key factor to ensure efficient funding for companies, asset diversification for citizens as well as a great opportunity for job creation. The UK institutions clearly showed their determination in protecting their capital markets when they executed a swift reform of their financial regulatory bodies after the first few years of the financial crisis and when they fought hard to prevent the Tobin tax to affect their equity markets, unlike Italy which is one of only two countries in Europe to impose such tax despite its marginal contribution to tax revenues and negative impact in the context of global competition for capital.

During the celebration for the first 20 years of the Alternative Investment Market (AIM), the UK’s Business Secretary, representing the Government, gave a speech including these words: “Over the past 20 years, well over £90 billion has been raised by companies listed on the AIM. That’s £90 billion invested in the future of exciting, ambitious businesses. £90 billion that has allowed innovative, growing companies to reach their true potential. And most importantly, £90 billion that has helped create hundreds of thousands of jobs for hardworking people right across the UK. When the AIM does well, when entrepreneurs do well, the whole country does well. And I’m proud to say that this government has a long record of helping to make that happen.”

These few words clearly show what is at the heart of the successful UK financial industry: a strong political vision that efficient capital markets are good for the country, its companies and citizens.

Within this context, we welcome the opportunity to continue Equita’s long-standing cooperation with Bocconi University aimed at analysing the capital markets for Italian companies and proposing initiatives to improve them, also in the light of successful examples taken from the most developed ones in Europe. After analysing in the past two years the investment banking industry in Italy and our investor base, this year’s focus, the comparison between the Italian and UK capital markets and the lessons we can learn from the most successful example in Europe, helps us identify actionable solutions that would enable our markets to become more efficient and help our companies to prosper.

We are very pleased that the recent Italian governments have improved and simplified access to the capital markets for Italian companies, with a number of regulatory initiatives during the last few years aimed at creating a real funding alternative for companies other than the traditional banking system. But a clear organic vision of the industry and a coordinated effort for an industrial policy regarding the asset management and investment banking industries have yet to become a priority for Italian institutions.

The UK example, where such vision has been paramount for decades, indicates some clear actions to be taken in Italy:

We wholeheartedly encourage our policy makers and regulators to start developing a coordinated legal and tax framework and promoting a real industrial policy for the Italian capital markets and the asset management sector. And we thank once again Bocconi University for this high quality and extremely helpful analysis and the potential concrete initiatives arising from it. 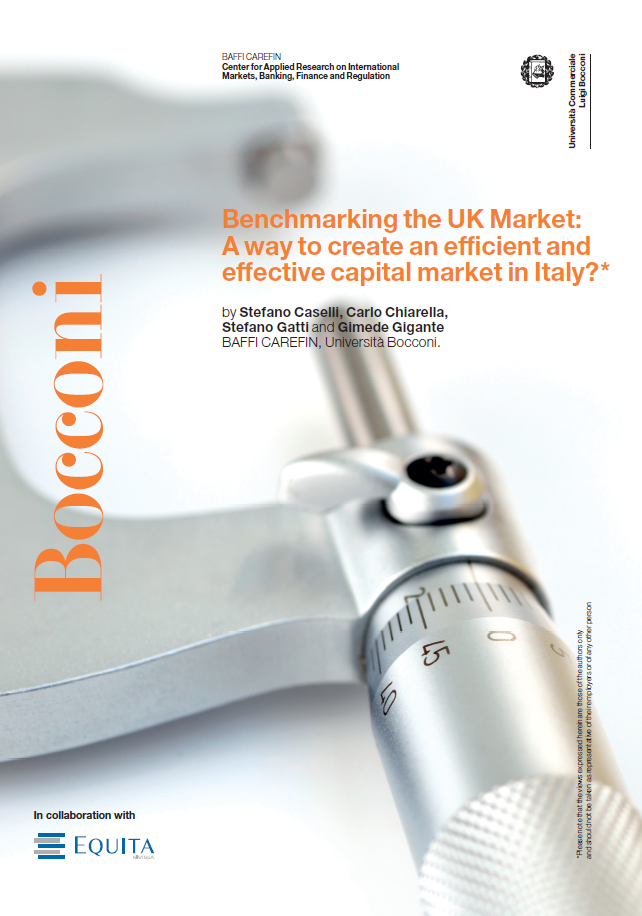