In this new paper, BAFFI Carefin looks at the performance of Italian equity and debt capital markets in the past decade. Findings indicate that, contrary to conventional wisdom that sees Italian markets underperforming other European markets, a careful asset allocation by investors on some selected segments and financial instruments could have led to a significant performance.

Over the past few years, investments in Italy have grown at different speeds, both in stock markets and debt markets. On the stock market, industrial firms (in particular the ones listed in the STAR segment) have been performing well, in line with the best equity indices in Europe. On the other hand, the stock market as a whole, heavily loaded down by bank stocks, has underperformed.

Indeed, Italian banks and insurance companies, whose performance since the financial crisis has been dismal, accounted for 31.8% and 12.3% respectively of the total market capitalization of Borsa Italiana in 2006, according to Mediobanca’s annual statistical survey on indices and data on investments in listed securities. Many factors concur to explain the loss of approximately 68% of the total market capitalization of bank stocks between 2006 and 2016. Since the bankruptcy of Lehman Brothers and the eruption of the financial crisis strong headwinds have buffeted bank stocks.

In this new paper, BAFFI Carefin looks at the performance of Italian equity and debt capital markets in the past decade. Findings indicate that, contrary to conventional wisdom that sees Italian markets underperforming other European markets, a careful asset allocation by investors on some selected segments and financial instruments could have led to a significant performance.

During the last few years, Italian companies have increased their access to international capital markets (debt and equity), both to refinance their existing bank debt and to fund future growth. This is a welcome development, a direct consequence of the financial crisis in Italy since 2008 and of the reduced ability of the banking system to act as the sole source of funding for Italian companies. And this is particularly important within the Italian economic environment which has been historically characterised by the excessive weight of conventional bank credit as compared to alternative funding sources. The continuing difficulties of our banking system have further reinforced the importance of capital markets, to the extent that, for the first time in many years, these have also become central in the economic policymaking of our recent governments.

Within this context, we are delighted that a set of tax incentives aimed at increasing the number of domestic investors in equity and debt securities, were passed in the 2017 budget law, and that such initiatives, for the very first time, incentivise long term investment for both retail and institutional investors. We expect these measures to have a significant impact on our capital markets and are sincerely grateful to the government for taking such decisive action.

As Italian capital markets increase their relevance and new long-term investors are created, it is therefore a real pleasure for Equita to renew our partnership for another three years with Università Bocconi, aimed at analysing the debt and equity markets and at proposing initiatives to make them grow and become more efficient for Italian companies.

Within this context, together with Bocconi, we thought it useful to develop a further initiative whereby we will jointly summarise the state of the Italian capital markets in an annual “Osservatorio”, that will be presented at the same time as the main position paper, in 2017 for the first time. We all believe this will be an additional important contribution to the general understanding of the key dynamics of this highly important area of the Italian economy.

During the first 3 years of our partnership, we have jointly analysed the key actors of the Italian capital markets, investment banks and investors, and we have subsequently compared the Italian and UK capital markets with the aim of drawing lessons from the most successful example in Europe:

The comparison with the UK is all the more important after Brexit, which will clearly increase the level of competition among different capital markets and will make it essential for Italian and European markets to be efficient and user friendly.

After framing adequately the Italian capital markets and the operators that play the key roles, we then asked ourselves the following: was it worthwhile for investors to allocate their resources to Italian companies during the last 10 years? How did those investment perform, in the middle of a major recession and the strongest ever financial crisis in Italy?

This is the focus of Bocconi’s 2017 positioning paper, which we believe is a very interesting one in the context of a general perception that Italy was a very poor choice for any wise investor. But as a matter of fact, as we will see, a lot if Italian companies have actually performed quite well and securities issued by them during the least 10 years have been a source of sizeable profits for investors. Companies listed on our stock markets, or others who have issued bonds or have been purchased by private equity firms, have grown, increased their international footprint, strengthened their balance sheets and have, largely, shown resilience and success in the context of a very difficult environment.

It was the banks, most financial institutions and some of the industrial companies operating in declining sectors that really showed poor performance, but the Italian companies that accessed the capital markets were very often highly profitable and a good choice for investors.

We collectively need to take action, to ensure that these successful companies will continue to prosper and be able to access efficient capital markets to fund their growth. These actions must include, for example:

We sincerely hope that our institutions will continue to focus on this important area of policy making and we thank once again Bocconi University for its high-quality contribution to the analysis and the debate regarding Italian capital markets. 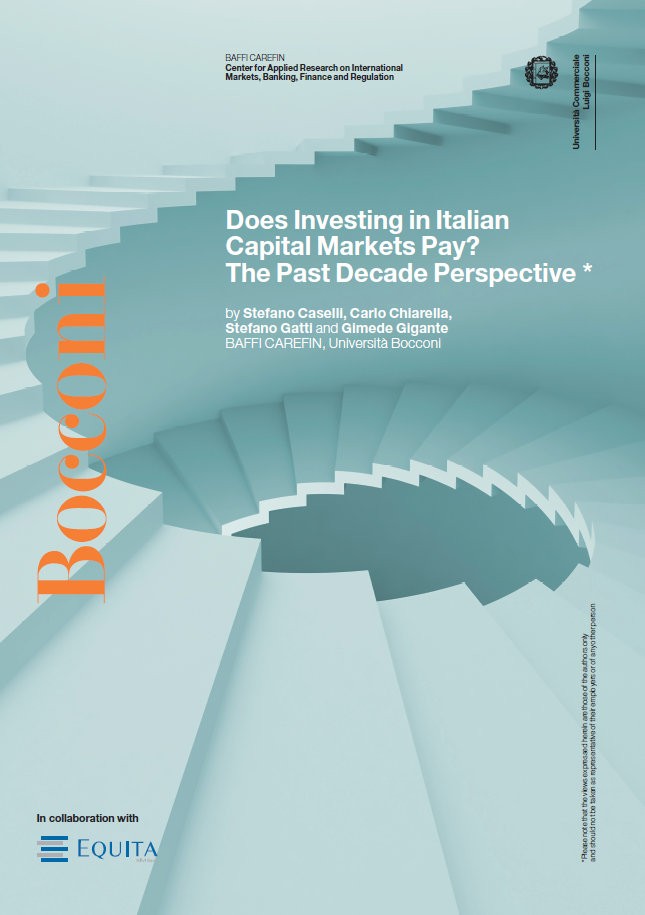