Investment banks play a central role to support the economy by creating the conditions for the efficient flow and allocation of capital. The key question of this paper is whether the size and the structure of the investment banking industry in the EU is functional to the characteristics of European investors and companies. Our goal is to provide a better understanding of the recent evolution of the investment banking market in Europe, to identify key trends in the industry, and to discuss the implications for the economy, the companies and the regulators and policymakers of Europe. As a result of our analysis, we obtain a map of which type of banks support which type of deals, a map that regulators and policymakers can use to monitor the evolution of the industry over time and possibly identify critical parts of the market that require targeted intervention.

It is a great pleasure for Equita to celebrate the seventh year of our partnership with Bocconi University, aimed at analysing and promoting the capital markets.

During the last 6 years, we focussed mostly on the Italian capital markets, analysing their key features, players and performances, and we made a number of policy recommendations that over time contributed to regulatory improvements and initiatives. The key point has always been that we, as a country, desperately need strong capital markets for our companies to grow and to diversify their sources of funding. This has always been true, but it has become even more necessary after the financial crisis.

On the other hand, we gradually realised that inefficient capital markets and a sub-scale investment banking industry have now become European issues. The wealth of the European economy is built on a diverse set of companies that need an efficient ecosystem to fund their growth. For Europe to flourish, it is absolutely key that we have well-functioning equity and debt capital markets, and this is even more relevant today given that the majority of European companies have less access to traditional bank credit than a decade ago. And yet, despite all the evidence, no one is taking action to address the weakness of European investment banking and the disappearing capital markets infrastructure needed to finance Europe’s small and midsize companies.

This year’s research focuses precisely on these topics and gives very clear evidence that the European investment banking industry is in trouble – and that something should be done about it.

The key facts can be summarised as follows:

Why does it matter? Because this is threatening the ecosystem which is essential for European companies to thrive.

The wider consequences of all of the above are by now abundantly clear to everybody: less coverage of smaller caps, fewer brokers focused on anything other than the very large listed companies and consequently weaker interest from institutional investors in the companies that represent the backbone of the European economy. This will not stop. Trading, research and investing in small caps have become uneconomical and as a result, only large corporate equity and debt issuers will be of interest to global banks and investors. The current environment is stifling competition and is unduly favouring global banks, investors and companies.

The situation is complex, the markets forces are strong, and it is necessary for Europe to have a well-planned strategy, particularly after Brexit. Potential solutions could include: simplifying the regulatory framework, incentivising initiatives to promote the markets and revisiting state-aid rules where necessary.

In summary, the European investment banking sector is a key component of our economy and it requires specific attention by regulators and a wide-ranging strategy. For too long nothing has been done: action must be taken now before it’s too late. 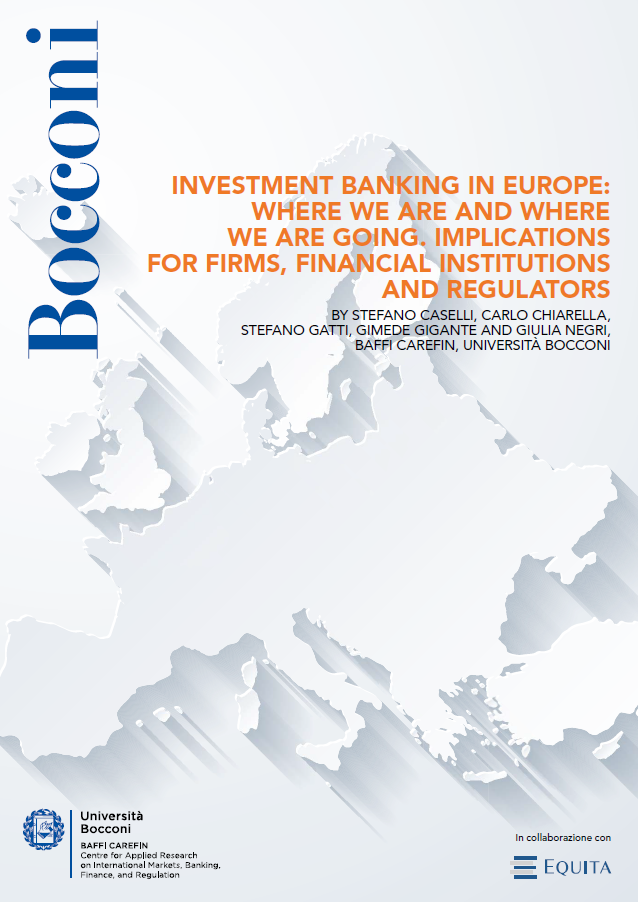